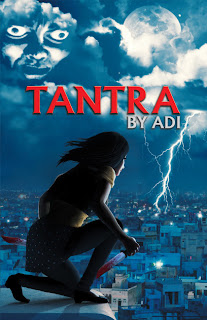 Anu is a leather wearing, no-nonsense professional guardian with a reputation for killing the most dangerous vampires in New York City. But when her enemies murder the one person she truly cared about, all she wants is vengeance. The only clue points to New Delhi, so Anu puts in for a job transfer.

In India, she finds more than she expected. For one thing, her fellow operatives have made a truce with the vampires. For another, it’s way too hot to wear leather.

At first, it seems Anu’s biggest challenge will be evading the nice boys her aunt wants her to marry. But when children start disappearing, she discovers forces older and darker than anything she’s faced before. All of Delhi is in danger, especially the sexy stranger who sets Anu’s pulse racing.

To prepare for the coming battle, Anu must overcome her personal demons and put aside years of training. This time, her most powerful weapon will come from her mind, not her weapons belt.

Adi is a science graduate of Stanford University with an MBA from the Harvard Business School. He seems to have decided to put his education to the best use possible by writing fantasy fiction.

My Take on the Book

I was very happy, overjoyed and thrilled when I received this book from blogadda, as this is the first ever book I have received for a review. It’s a good book to venture out on if one wants to experiment and read something different.

Going by the recent trends of the India authors I neither had high expectation nor any perception about the book. But I was pleasantly surprised, for a debutant author this one is very well written and is equally well researched. Of course not unflawed but keeps pace, at times it keeps you hooked and you may also vary. It’s not a page turner or a edge of your seat thriller, but it is well paced.

Anu the protagonist is believable while the American spoken by Amit and Gaurav just doesn’t fit. The author in trying to show Anu inscribed with American culture and seems that she can hook up with anyone who is a least bit attractive. To show a girl enraged about the murder of her boyfriend and is in India on vengeance falls for a meaty Indian male just by the sight of him is a put off and could have been avoided.

In the second half it was not quite gripping as I thought it to be once I started reading. The notations such as shifting, guardians are generally not known to people who do not follow vampire movies or read vampire stories and so I felt the author could have given a brief on them somewhere at the start of the story.

What makes this book a feel good factor, is the mention of the satvic and tantric rituals and their details are very well researched and are very educative and gives one a peek in our rich past and ancestral history which some carry forward in a constructive way were as some others in destructive manner. It also throws light on a fact that one’s knowledge is useful or dangerous is not known until the way it is used. In a way it also reminds us how powerful is our mind and how we can control it, if we so desire. But I was disappointed with its abrupt end and the way Anu falls for the negative, where as she was shown to stick by her guns all through the story.

Over and above a really good book to read and I thank blogadda for sending me such a nice read. A very well written book from a debutant author and this surely will change people’s perspective towards the Indian writers and I would rate it 7/10.

This review is a part of the biggest http://blog.blogadda.com/2011/05/04/indian-bloggers-book-reviews" target="_blank"> Book Review Program

for http://www.blogadda.com" target="_blank">Indian Bloggers. Participate now to get free books!
Posted by Karan Shah at 10:50 PM