For past several days the city of dreams is losing its sleep. The city of Mumbai since Satyapal Singh’s departure is without a police chief. Musical chair is being played with the Mumbai Police Commissioner’s office.

The political class has made mockery of the dignity associated with the high office while indulging in blame game unto each other.

Here’s something I delved upon while reading a newspaper few days back: 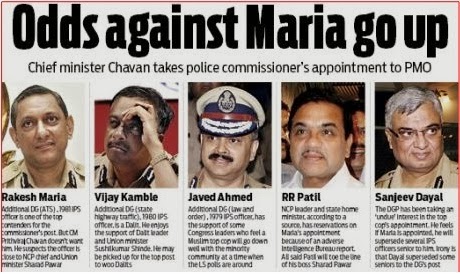 I was flabbergasted to read the alleged reasons for and against appointment of one of the contenders to the coveted post as seen above.

Reflecting over the events of the last few months, the lack of political intent and their utter disregard to the security of the city and its people is abundantly clear. The chosen representative of the people have turned a blind eye and shown apathy and insensitivity towards the common man.

When even a security guard is expected and required to serve a notice period of minimum of one month. Then is it not prudent to either have the replacement ready, if not, then make the incumbent serve the full notice period for such an important position of a police chief? Also make sure that an appropriate replacement is found in mean time find his replacement.

The new Police Commissioner of Mumbai should have been appointed on 1st April, 2013, following the retirement of DG (home guards) Sridevi Goel, as on that day Singh was due for promotion. However his promotion file which was supposed to be received on April 1, 2013 by the Chief Minister was received after 5 months i.e. on September 30, 2013, and the same remained pending for almost a year, allegedly due to a tussle between Chief Minister and Home Minister. It is a classic case of policy paralysis.

The apathy doesn’t end here; it’s more than 15 days since he resigned but the government is yet to appoint a new police chief. The government not only failed to appoint a new chief immediately when the incumbent was due for promotion but also accepted his resignation forthwith waving off the notice period, with complete disregard to the security and inconvenience of the common man.

If such appointments are made for political considerations, then we will have to pay a very heavy price. There can be another 26/11 waiting to happen in near future.
Posted by Karan Shah at 6:23 PM